Like many of my former classmates looking to land their dream job after university, I researched dozens of companies covering every sector you can think of. Like most Brits I knew Virgin Media but was not as aware of its parent company, Liberty Global, until I saw LinkedIn’s Top Companies list 2017.

First impressions were good, ticking all the right boxes—international, interesting, fast-paced and dynamic—so I decided to apply. The recruitment process was rigorous to say the least, but I did my homework. After many tests, calls and meetings I was overjoyed to be offered a place on the Commercial track starting September 2017.

Fast-forward six months and I am pleased to say that my first impressions hold true. I’ve learned lots from my time with the B2C team (thanks, guys!) and now I’m making the switch to the second of four rotations – this time with B2B. While I have a few moments between projects, I thought I’d share with you my thoughts so far.

I’m originally from Oxford, England. And while I have lived abroad in Italy for a year, nothing prepared me for the personal and professional pleasure of working with people from different cultures and backgrounds.

When I accepted the role, I agreed to relocate from the UK to our European office near Amsterdam. For some, the idea of moving abroad is a dream come true; for others, it’s a deal-breaker. Personally, I figured, why not? Cycling, stroopwafels and a great city to live in – what’s not to love?

My message to anyone who is hesitant about moving to another country is this: take the plunge! It broadens your mind and shapes your thinking in ways you can’t imagine. Our campus is a great example of this in action, not least because it’s home to 1,200 colleagues representing more than 50 nationalities. There’s real joy sharing ideas with smart, switched on colleagues who bring different perspectives.

I’ve started learning Dutch—lekker, toch?—but thankfully, everyone speaks English. That said, I have to admit that as a newbie some of the conversations can be quite confusing because of all the technical language!

The acronyms alone require a steep learning curve… CVP, CEX, NPS, anybody? But most colleagues are invested in helping you understand because they want to know what youthink. When my team and I were helping our markets improve their billings and collections process, I was impressed by the fact that all the best ideas were taken on board, regardless of who they came from. The best help you can give a colleague is thinking through a challenge together.

I’ve heard this saying a lot but never fully understood what it actually meant until our former Chief Technology Officer, Balan Nair, explained it during our impressive Tech Summit last year.

Balan said that even though Liberty is a large company, our entrepreneurial spirit remains strong. Every member of the team is encouraged to pursue their best and brightest ideas… the trick, he said, is not to let them overwhelm you. One step leads to the next, which leads to the next. And while asking for help is a good thing, no-one else can take those steps for you.

While working for the B2C team, we made huge progress in improving the effectiveness of our customer call centres by migrating to messenger-based support. This would have been unthinkable a few years ago and, I believe, will quickly become the new norm.

I’ll always remember the wise words of my first mentor, Ann Montgomery, Director Customer Care Operations at Liberty Global, who encouraged me to expand my network from the get-go. She told me to stay friendly, stay positive, and always say ‘hello’. It costs nothing and the fact is, people work best with people they like – so do what you can to make it easy for them!

During my first six months I have made it my mission to meet as many colleagues from different departments and different operating companies as possible. Most importantly – never underestimate the power of the espresso bar. You’d be amazed how many great ideas are sparked by people bumping into one another while grabbing a coffee. 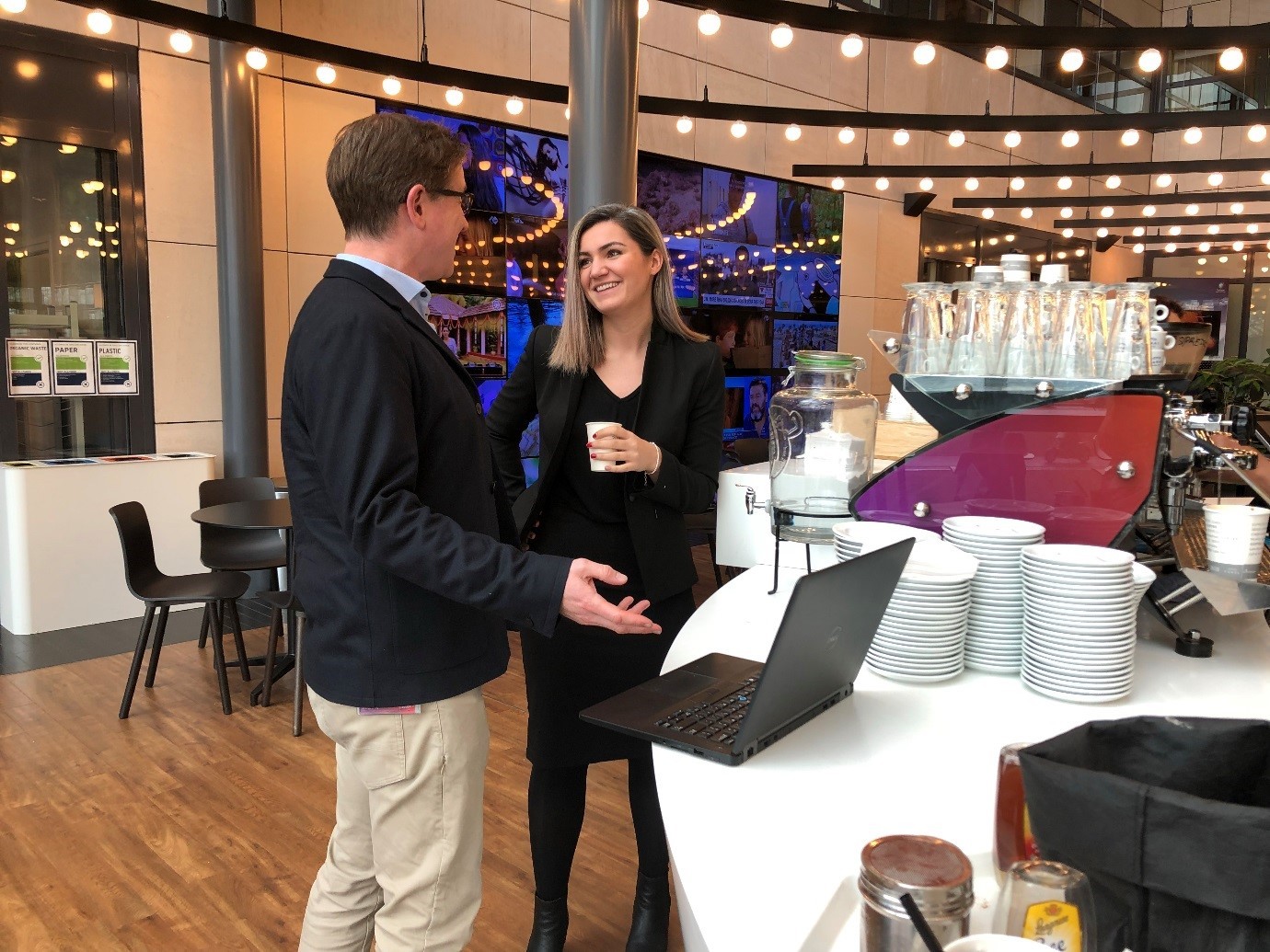 Change will do you good.

The best thing about our graduate programme is rotating between teams and functions. Ironically, this is also the most challenging part! Having spent time getting to know people and projects, without skipping a beat you’re off to the next team to start over. This can be frustrating but it’s all part of the job. Building a broad network is essential for your future success. The old adage is true – who you know (and who you can ask for help) is almost as important as what you know.

Technology is the future.

While I can’t avoid being labelled a millennial, I would hardly describe myself a tech-head. Before Liberty, I didn’t know my coaxial cable from my Connect box. But that’s changing, and I’m thankful that it is. As an industry—and as a civilization—we are in the midst of a technological revolution. Fibre-optic based Gigabit internet is going to change the way we live, work and play, and in ways we can’t even imagine. At Liberty we are driving this change and I couldn’t be more excited to be part of it.

Be true to who you are.

As I reflect on my first six months in the working world, I think about all the advice I’ve received and all the lessons I’ve learned. The best advice I can offer future graduates is this: be true to who you are. People will respect you for it and in the long–run, it’ll be your best reward.